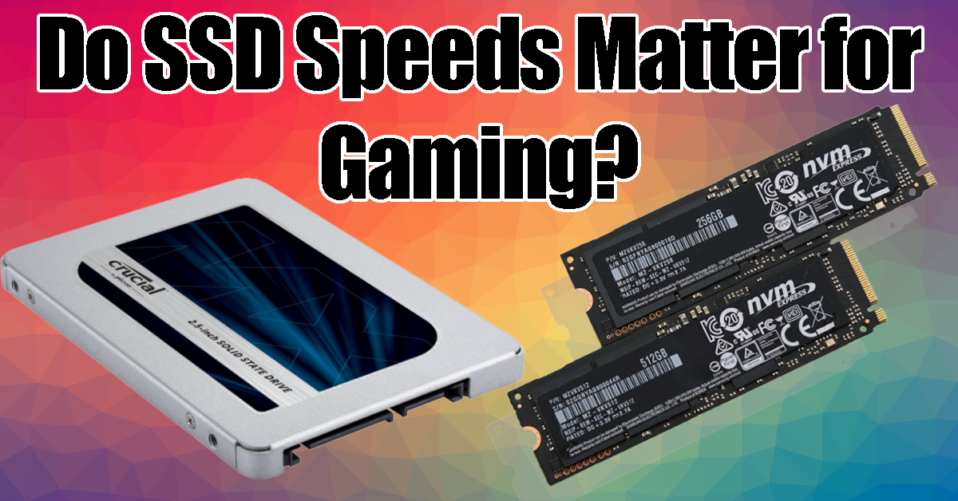 So does SSD speed really matter for gaming? How do you choose the right SSD for your gaming pc? Say you’re compiling hardware for your brand new gaming pc build: You’ve got a kick-butt CPU; a raging fast graphics card; the motherboard is just right; you have just the right amount of memory; a PSU to power it all; a pc case to house it all in, however, you’re now near the end of your budget and your thinking — “how much do I have left in my budget for my gaming pc storage, and how much space do I really need and does it reeeealllly matter which one I choose?”.

I mean the same analogy could work really for any piece of pc hardware, however many probably give a smaller amount of thought to exactly which SSD they want to plug into their gaming pc than most hardware, never mind really diving into things like precise read/write speeds,

Ok, so if we look back say five-ten years ago, the only major choice was to choose between an older SATA Hard Disk Drive (HDD) or a SATA Solid State Drive (SSD), typically 2.5inch.

The choice was super simple if you could afford an SSD, you chose an SSD, because the read and write speeds extremely exceeded that of an HDD, and by a lot. It would be ideal to tell someone that it’s exactly 100X faster, but the reality is that an SSD is faster by anywhere from a few times to a hundred times faster, based on what it’s loading or writing.

Hands down though, an SSD is faster by a lot, I mean you could swap your main HDD drive out for an SSD and you’d cut something as simple as booting Windows by at least a half and in most cases more.

What made this choice so easy was the fact that the plain read write speeds were so obviously noticeable to any lay user. The reason being for this was that an HDD operated using physical mechanical parts that had to move using a mechanical head needing to locate the data on a spinning disk — these so-called HDDs could sometimes be referred to “spinny drives” for this reason.

While an SSD operates without any moving parts, typically using flash memory and accesses data persistently.

What SSD Options Are Currently Available for Your Gaming PC?

These days though, you do have a few more choices, and to make things simple we are going to just plainly talk about SSD’s that are connected through either SATA, PCI Express (PCIe), or using PCIe using NVMe protocol (NVMe-PCIe SSDs).

And basically, any drives that use PCIe or PCIe with NVMe protocol will be faster than standard SATA connected drives — and most modern pc hardware components support these right out of the box.

So Obviously You Should Just Choose an M.2 Form Factor PCI-E SSD Over a SATA 2.5Inch SSD, Correct?

Well, since we are talking about gaming PCs here, quite honestly an M.2 NVMe PCIe connected SSD isn’t going to be overly noticeable over a less expensive SATA SSD purely by face value. You must note that high-end drives are faster, but don’t often feel faster than more affordable options in common pc tasks.

Let’s take a look at some actual gaming benchmark example from Tweaktown’s article that tested over 120 SSDs:

As you can see, there is definitely a noticeable difference between certain SSD’s (notably the Intel Optane SSD, which can only be used on Intel machines and cost a ton), but in reality, most of the better performing SSD’s in top 3/4 of the chart above ar either a mix of PCIe type SSDs or SATA, and furthermore actually load games within 3 seconds of one another. Although if you are to take one major lesson, you should definitely not be buying HDDs anymore!

Yes, PCIe NVMe SSDs are faster and have greater read/write speeds, and you may notice very slightly faster boot times/ software load times, but I would advocate your choice should be more closely related to your budget on a per gigabyte per dollar value proposition. And if do you do more than gaming and actually do large file transfers frequently, video work or us heavier applications, then the choice should lean you more towards the faster drives.

Choose the Right SSD for your Gaming PC Comes Down to These Three Things:

Measuring Gigabytes per Dollars Spent on your SSD ($/GB):

Take the total amount of Gigabytes on the SSD you plan on purchasing, and divide that by the total cost, and you get the total $/GB. Now, simply buy the one that offers the lowest $/GB.

Do keep in mind that this is not the whole story with regards to determining the TOTAL value of every single SSD out there, but for most gamers out there, it can help you simply determine basic value of what you’re getting. And further, some higher-end PCIe NVMe SSDs can cost 3X or 4X more than a SATA SSD, so in the end, you have to ask yourself, how much is a couple of seconds worth to you for 3X or $x the cost per GB.

So, Does SSD Speed Matter for Gaming?

In short, SSD Read/Write speeds do matter for anything you do on your PC. Although, for any typical gamer you may or may not even notice some of the increase in load times when using intensive games, or any game for that matter as at the higher-end load times may actually only differ by a couple to a few seconds. Not to say a couple of seconds isn’t noticeable, but this may not be worth a higher-end SSD that may cost 3X-4X more per actual GB of storage space available.

Newer M.2 form factor SSDs are worth purchasing for the right price and they are worth purchasing if you will find yourself doing large data transfers frequently or running intensive software that does compression, transcoding or high-end video editing. Overall though, follow the budget you’ve set our for your entire Gaming PC Build, or for your storage upgrade and determine what the best value is to you.

Building a Gaming PC? Then check out the Best 2019 Gaming PC Builds of the Month.