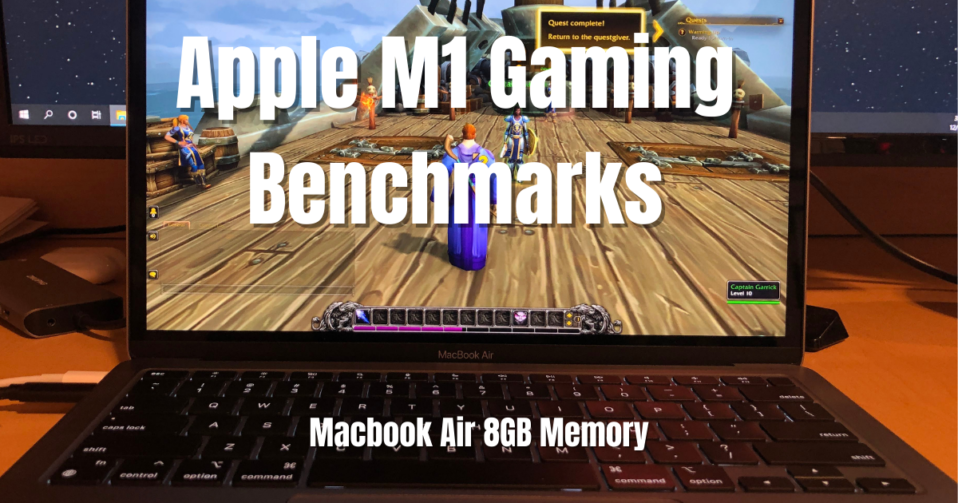 This may be a bit of a divergent article than the usual here at Newb Computer Build, as typically here we’re all about pc hardware and gaming. However, I recently purchased the low-end Apple M1 Macbook Air and thought, what the heck, let’s try some games and benchmarks.

While I’m an avid PC gaming guy, I’ve used an Early 2011 MacBook Pro (15 inch i7) for my day job nearly every weekday for nearly 9 years….9 years! It held steady and performed perfectly up until it died last month (right as Apple was rolling out their new M1 chip Macs.

And now, we have the new “Apple Silicon”, an ARM-based processor developed by Apple themselves, known as the Apple M1.

*To note: A lot of applications don’t currently work natively on the new Apple Silicon / Apple M1 infrastructure natively yet, so Apple has also rolled out a Rosetta 2 Emulator to bridge the transition between Intel and Apple processors, that allow these new Macs to use most older software without a hiccup. Technically, performance should be negatively affected, however, a lot of other benchmarks have been finding this is not the case in all instances since Rosetta 2 is so highly integrated.

Now, enough about the history and what the M1 is — this article is all about exploring how games work on the late 2020 Apple Mac Book Air I just purchased.

First, this is is in no way the computer I’ll use for gaming, but since this is a PC Gaming site, and I have one of these on one of these, I thought what the heck let’s see how it games.

The Mac I’m using is an Apple M1 MacBook Air with:

Benchmarking on a Mac can be a tad different than on a PC, as there aren’t as many options in terms of third party software.

For benchmarks, I’ll be simply measuring an average of Frames Per Second (FPS) playing each game for a few minutes. To accomplish this, I was going to choose Count It (Version 1.5.0) however, it didn’t seem to work well on the Apple M1. So what I did instead was use either in-game FPS counters or STEAM’S built-in FPS counter. Do

When benchmarking, I will have the game runnings, as well apple “screenshot” for screen recording, which I did find to affect FPS by a few FPS at most. Since a lot of games don’t work Natievly yet on Apple Silicon (Apple M1), my mac will also be running the Rosetta 2 emulator in the background, which should technically have a performance impact until more game and software developers start making Apple Silicon native games and apps.

A quick primer before we get started here. When benchmarking games, what you want to typically look out for is a minimum of an average of 30 FPS and ideally an average of 60FPS. Anything higher than that is butter – and if you were using a higher-end gaming PC you could even aim for 144FPS, but this capability would be dependant on the monitor refresh rate that you’re using and of course the capabilities of your hardware.

In this article, I wouldn’t expect to get “high-end” gaming PC performance, but we’re more interested in the capabilities of the all integrated Apple M1 chip.

The last thing I’ll mention is, the other things that will have an effect on performance, is our resolution and game settings. Below I will be using a standard of 1080p resolutions and maxing our game settings to see what performance we get, and then scaling those settings down to see if we can get an ideal FPS. If the game calls for it, I will max the resolution out as well using the integrated monitor (2560 x 1600).

The games chosen are purely ones I own and can see Mac gamers being interested in playing if they need to be playing them on their Mac M1’s. Also, Bootcamp isn’t compatible anymore, so Windows games cannot be tested.

*Note: I will be adding more games as I test them. If you have a suggestion, leave a comment below!

I’m going to be honest, Starcraft 2 just didn’t run that well, at least not up to the amount I thought it would. With that being said though, it is definitely playable at 1920×1080 resolutions with anything High Settings and below.

If you are planning to play at the full potential of the included 2560×1600 built-in monitor though, you might have to settle for the Lowest settings for decent frame rates, but it’s doable!

I played Deus Ex Mankind Divided about two years ago now, so it was great to boot this one up again. The gameplay at the native monitor resolution of the Apple M1 Macbook Air at 2560×1600 was only relatively playable on the lowest settings, but did get around 19 FPS.

If you really wanted to play Deus Ex though, playing on Low Settings at 1080p would warrant you just above 30 FPS, making it an easily playable game on this laptop.

Gaming on an Apple M1 Macbook Air – Is it worth it?

As I play more games, only time will tell whether or not gaming on an Apple M1 Macbook Air is worth it, and by that I mean which games. I mean, if you are in the market for a gaming laptop, I would absolutely not solely consider this.

However, the M1 chip shows promising performance, especially with this particular Macbook Air — especially since it’s a self-enclosed passively cooler case too. The chip is an integrated chip, that includes both the CPU and Graphics and more all in one chip, which is impressive.

I do have some questions around whether or not the Macbook Air may throttle performance if it gets too hot (ie. while playing graphically intense games), so it would be good to compare this to the Macbook pro model of similar specifications.

There may be some promise though in less graphically intense games, especially as developer start making games that natively run on the Apple M1 – as was seen with World of Warcraft, which was made to run natively and not using the Rosetta 2 Emulator on the launch of the Apple M1 Macs.

I’m curious as to whether there will be other games that significantly improve with native Apple M1 Performance, however, there are still games that are playable with their presets significantly scaled back.

All in all, I bought this Mac as a replacement to a previous 2011 Macbook Pro, which served me very well for my day job and it seems to be holding up very well to the task.

And while I’m an avid PC gamer who loves to build PC’s, I had to try at least a few games on the Apple M1. And if you are looking for an integrated CPU to game with, you may be better off looking at the AMD 4000 series (albeit they are not self-enclosed, ultra-portable laptops!).

Coming soon – To be benchmarked

The following games will be coming soon as I get to them. If you would like anything in particular looked at, leave a comment and I can try my best to check it out, assuming I either own the game or it’s easily accessible.