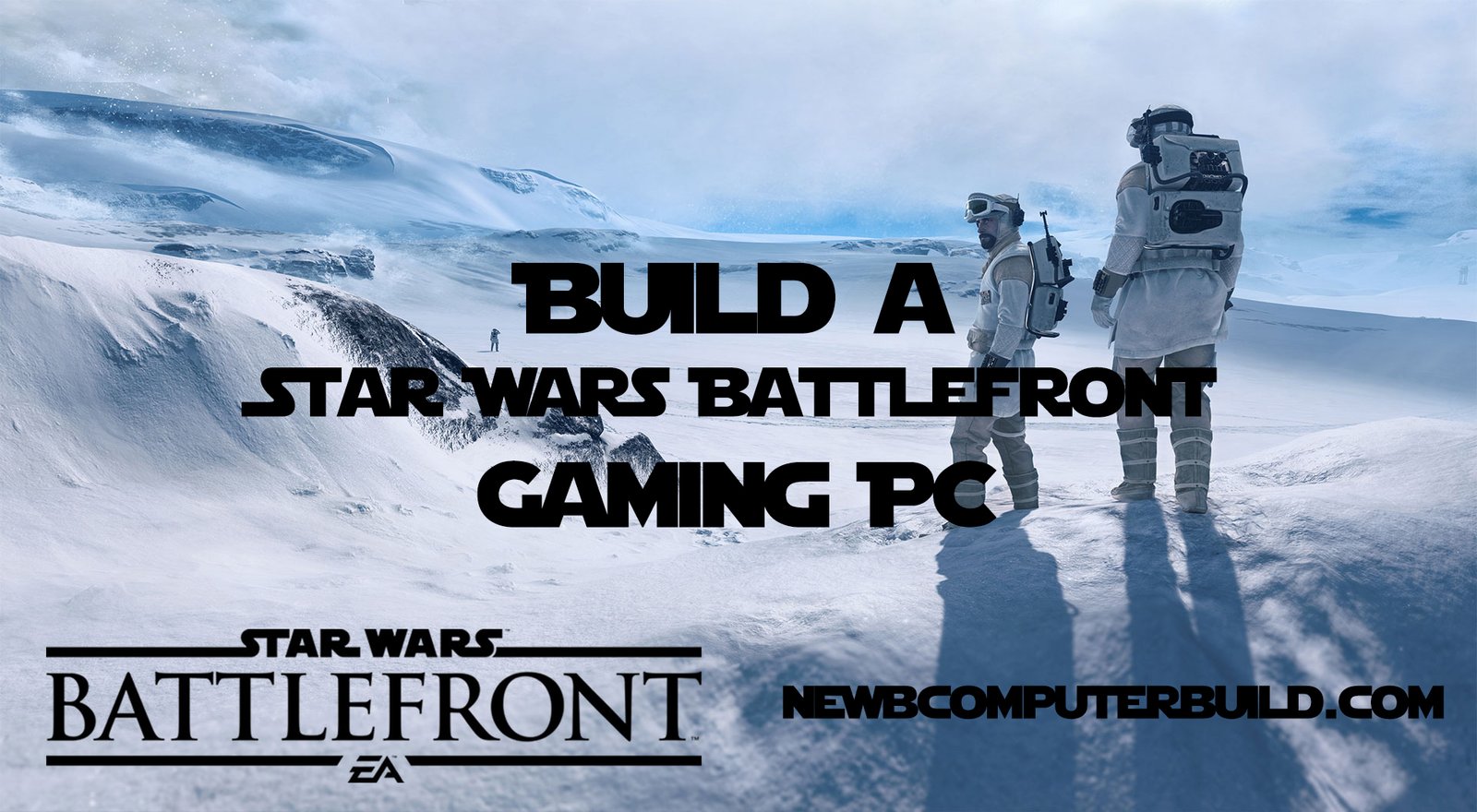 Battlefront is a game that immerses you into epic Star Wars battles where you can fight for the Rebellion or the Empire in games of up to 40 players. You can also fight in exciting challenges that were inspired by the StarWars films in solo, split-screen or through online co-op. This is a fantastic game that was released on November 17th, 2015 and since then there have been plenty of benchmarks done for the PC, bringing to light what works best for the game and what you’ll need for the perfect Battlefront PC build.

Now, you can build an even cheaper pc with slightly lower hardware and still play the game, however my assumption is that anyone who is investing some cash into a brand new pc might as well purchase hardware that can play the games you want to play (such as StarWars Battlefront) at their max settings on standard resolutions. Likewise, you may already have a PC and are curious as to what you may need in order to play the game at higher settings or more smoothly, and in that case please check the hardware I recommend below, look at the recommended pc requirements and feel free to ask for an opinion in the comments section of this article.

Star Wars Battlefront has been surprisingly well optimized and you may be surprised at what kind of performance you can get, even on a budget. In the following couple of charts you can see what I’ve based the below builds on these GPU benchmarks done at TechSpot.com where they’ve benchmarked the game with everything from 1080p – 4K using many graphics cards and even cpus. I’ve only placed two builds below, the first based on the 1080p (1920×1080) benchmarks and the second on the 1440p 2560X1440) and playing at at average of 60fps

For those of you that check out the gaming pc builds of the month articles here at Newb Computer Build, you may very well recognize this latest build as the $600 gaming pc build. This build should accomplish an average around 60fps when playing Star Wars Battlefront on Ultra presets at 1920×1080 resolutions. If you didn’t have a chance to look through the benchmarks charts featured in the introduction to this article, then do so now. That’s where you’ll see how the R9 380 graphics card fares in Battlefront (right around 60fps).

That being said, the chosen CPU is the AMD FX 8320, this should be a great cpu for this build due to its unlocked capability of easily achieving 4Ghz and while also being a close contender to the AMD FX 8350, which was also featured in the techspot.com cpu benchmarks for this game while being able to keep strong framerates when competing with other cpus.

This build includes an 8GB kit of DDR3 Crucial Ballistix Sport RAM, which fulfills the recommended amount of ram and is standard in most base gaming pc builds these days. The hard drive is a 1TB Seagate HDD, which is an affordable storage option (so SSD mind you) and is plenty of storage space for most gaming pcs. The EVGA 500 W1 PSU was chosen as 500W is enough for this build and it stands at an affordable $40 right now, which keeps costs down. Also note, that I don’t include an optical (DVD) drive, so you will install your OS either through USB or external HD, otherwise you can purchase one.

Finally, the case chosen is the Cooler Master Elite 431 Plus, which is an affordable mid tower case featuring a side window and easy to build in with a tool free design as seen in the case’s details (read more at coolermaster.com):

This build is the perfect choice for Star Wars Battlefront, since it will max the game out at 1080p and for those building a brand new gaming pc, you might as well aim for these presets. That being said you can play the game with a lower end graphics card or even cpu (see pc requirements in the introduction), so please keep that in mind should you be simply upgrading your older pc build and sticking in a new gpu for example.

This build is estimated to play Star Wars Battlefront with max settings at 60FPS on 2560X1440 resolutions. *See below for explanation

Just like the 1080p build above, you may recognize this build. This is the same as the monthly $1000 gaming pc build features lately and it’s the perfect build for those considering playing Star Wars Battlefront on Ultra presets on 2560×1440 resolutions. In the benchmark chart in the introduction of this article you can see that the R9 390 Graphics Card accomplishes an average of 60FPS at 1440P and an average of 87FPS at 1080P. So if you want to play on the higher resolutions this would be the route to do so, and even if you’re planning on 1080-, at least you can be well assured that you’ll have smooth as butter gameplay.

The included CPU is the unlocked Intel i5 6600K – this should be plenty of computing power which won’t bottleneck any high end graphics cards and it has the potential of an easy overclock. To pair with this CPU we have a Cooler Master Hyper 212 EVO cpu cooler, as the cpu doesn’t actually come with a stock cooler, so this quality air cooler will help cool even when overclocking.

The motherboard is the Gigabyte GA-Z170X-Gaming 3. This motherboard supports both Crossfire and SLI (so there is potential for two R9 390’s in the future). View the specifications for this board below and you can learn more on the product page at gigabyte.com):

We have a kit of 8GB DDR4 Crucial Ballistix Sport RAM included, which does fulfill the recommended memory amount in the system requirements and should be all you’ll need for Battlefront and most games. For storage, we have a 240GB Samsung 850 EVO SSD, which include a modest amount of storage space and offers the fast loading times of an SSD. The EVGA SuperNova 650G1 is plenty of power for this build and offers the quality of the G1 line pf power supplies with the extra added feature of full modularity.

And what would a Star Wars pc build be without the added attempt to coincide the look of your build to that of the Star Wars feel – the pc case chosen for this build is the NZXT Phantom 240 mid tower case (white), which is one of the best value cases out there and very Storm Trooper esque. The NZXT Phantom 240 has the following features and you can learn more at nzxt.com –

If you are building a new pc to play Star Wars Battlefront, I hope that you’ve found this article and the above builds useful. There are two builds above, with the first designed for those wanting to play Battlefront on Ultra with 1080p and the second designed for those wanting to play on resolutions up to 1440p on Ultra. Should you have any questions for the builds in this article, hardware alternatives or anything else feel free to leave a comment.

You can also check out the monthly gaming pc builds posted here at Newb Computer Build.