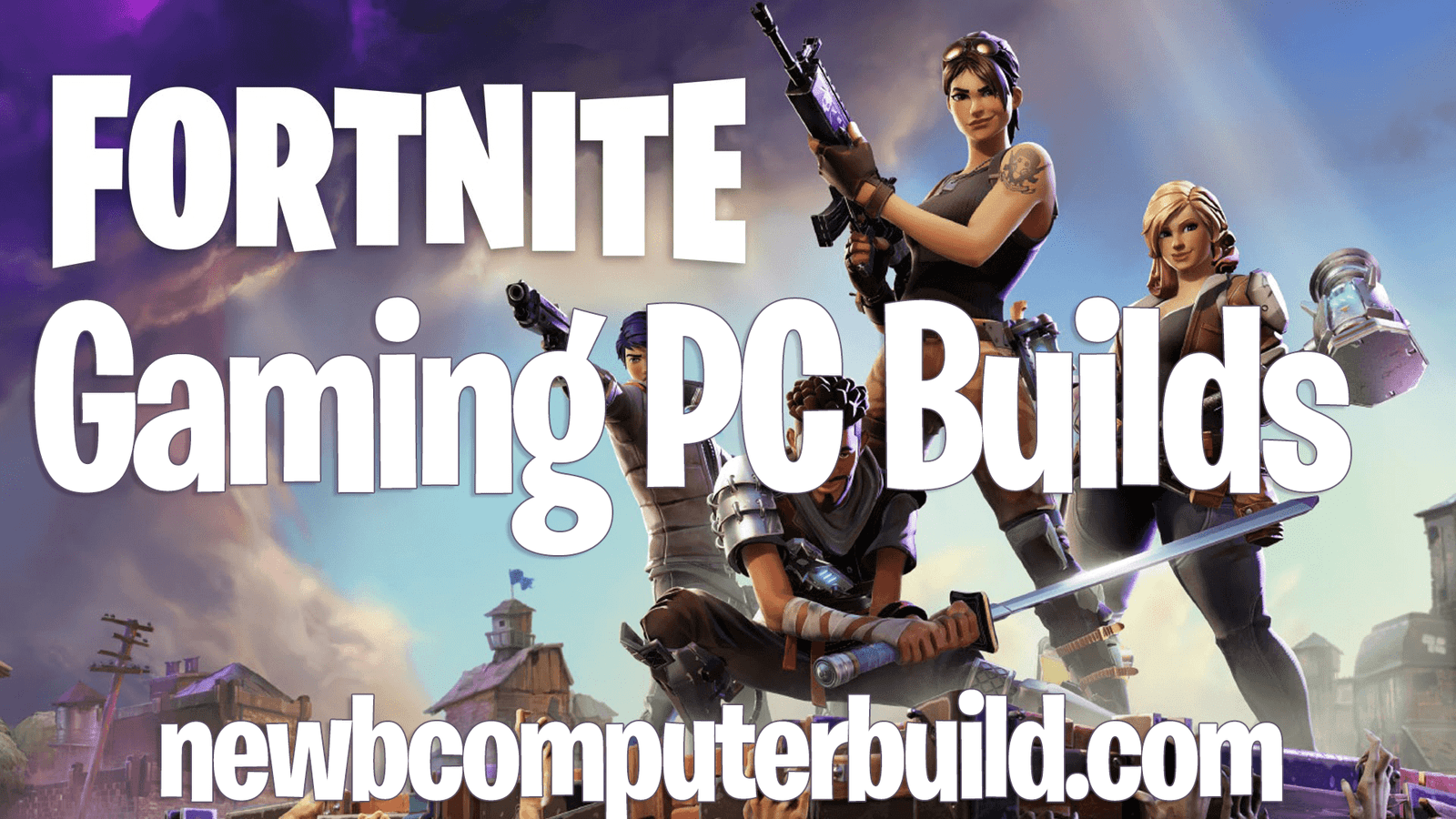 Build the Best Gaming PC Build for Fortnite this 2018!

Fortnite is a co-op battle royale survival game developed by Epic Games, Fortnite is more popular than ever and is currently one of the biggest games of 2018. The game has created such a phenomenon that spans those of all ages and is streaming widely through services such as YouTube Gaming and Twitch.

With this vast popularity comes those who want to play the game as efficiently as possible or those who are wanting to get into the gaming pc build market in order to get the most budget-friendly high performing Fortnite system. The PC builds you’ll find in this article are geared for those that want to max out the game for the best cost possible there is also a basic pc build geared for those that are simply wanting a good bang for your buck pc build that will just get the job done.

The minimum requirements for Fortnite are really not that robust, so even if you are playing on an older PC with integrated graphics, it looks like the game will at least be playable, which is great news! You should be able to play Fortnite with pretty much any PC built in the last five years or more.

If you were going to actually play with these minimum specifications, you can probably expect to play Fortnite at around 30 frames per second at 720p resolutions on the lowest setting — not the most ideal, but it goes to show you don’t ned a ton to play this game.

However, if you are looking to see what you already have in terms of a pc or hardware laying around your house, it must at least look something like this:

Now for the recommended requirement are mostly here for reference, but again the requirements really are not that high, especially compared to other popular pc games, which goes to show that the popularity around Fortnite probably also comes from its massive accessibility.

If you go with just the recommended specifications for Fortnite, then you should expect to get something like 60 frames per second at 1080p at Medium graphics settings.

For Playing Fortnite on Medium-High Settings at 1080p with >60FPS

The assumption with this build is that it should support decent PC gameplay in Fortnite at Medium (and High with calibrating) settings at 1920×1080 with an average of 60FPS. Most standard gamers with a basic 1080P monitor (or below) with a refresh rate of say 60hz, should choose this build. You can play Fortnite on lesser performing hardware, but this should be a great starting point if you are building a shiny brand new pc build.

The beauty about Fortnite is that it’s a game that doesn’t necessarily need to be cranked all the way to full graphical settings, sure it may look flashier, but ultimately it most likely won’t give you a massive tactical advantage.

In order to run Fortnite on Medium to High settings with over 60 frames per second, we can go with the GTX 1050 Ti graphics card as it achieves well over 60FPS on medium presets in Fortnite, just take a look at the Fortnite benchmarks from PCGAMER below where it gets around 97.8 FPS on average. 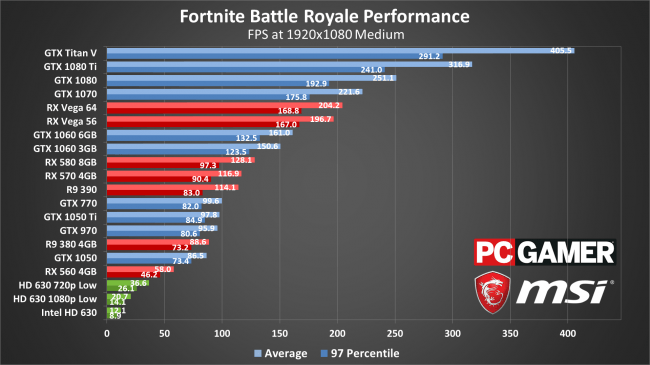 The CPU included is an AMD Ryzen 5 2600, which is an overall amazing gaming cpu for its cost and can be easily overclocked for further potential. This CPU also comes with a stock Wraith cpu cooler, which is all you’ll need to run Fornite with this pc smoothly.

The motherboard chosen for this Fornite gaming pc is the GIGABYTE GA-AB350-Gaming 3, a perfect combination for the Ryzen cpu as it leaves room for overclock and has plenty of features including (see here for a quick overclock tutorial from gigabyte themselves):

The RAM included is a kit of Kingsten HyperX Fury 8GB kit. This should be enough RAM to efficiently run Fortnite as 8GB is recommended and 4GB is the minimum.

The storage included is a Kingston Digital 120GB solid state drive SSD. This is a great start in terms of storage speed and capacity, however, if you do think you’ll need more storage right away, you could consider a 256Gb or larger SSD as well.

The power supply included is the affordable Corsair CX Series, CX500, with enough juice to power this build and for a good cost.

And finally, the pc case included this month is Corsair Carbide Series 100R, which is a case that does it’s job perfectly, fit the pc hardware you need to power the games you want to play and at a very affordable price. PC Gamer and cases vary, so do look at options that would better suite you if you want to shop around, otherwise the 100R will do the trick.

Alternatives / Upgrades to the Basic Gaming PC for Fortnite

The build above reflects one that matches just above the recommended requirements to play Fortnite on the PC and at Medium to High settings at 1920×1080 resolutions. However, if you want to pump more FPS (specifically the minimum fps expected) or make double sure your PC can play Fortnite and more games then these are some of the suggestions I would have over and above the ones in the base build.

The Best Fortnite PC Build can push the performance limits of Fortnite to over 60+FPS at resolutions of 1080p. That being said, this build can also play Fortnite at 1440p resolutions, but don’t expect quite 60+ FPS all the time.

If you are going to be playing at 1440p with this build, you should set settings to High rather than EPIC, or you may need to upgrade to something like a GTX 1070 to GTX 1080 graphics card to compensate.

For the EPIC settings Fortnite gaming pc build, we need to have at last a GTX 1060 6GB graphics card, which is what we previously included in the best foprtnite pc builds article, however we now have a better performing RX 580 for a better cost. See the below benchmarks thanks to PC GAMER, where you can see the GTX 1060 6Gb card rains in an average of 63.6 FPS on EPIC settings, perfect! 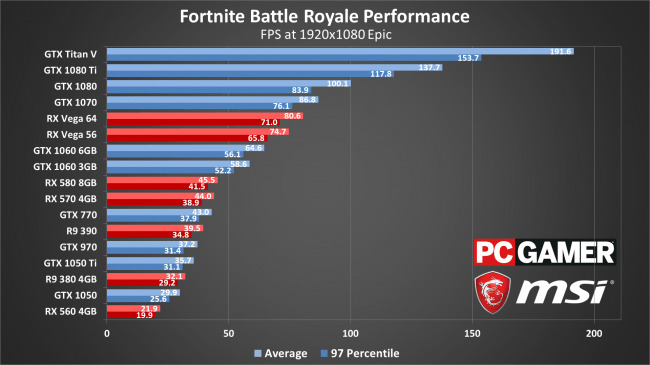 To pair with the graphics card, the included processor is an Intel i5 8400, a juicy enough CPU and is, in fact, the top performer in terms of benchmarking outperforming even the Intel i7 8700K in PC GAMERS tests.

For the motherboard included is the MSI Z370-A PRO, which includes (See more at MSI.com):

The RAM included is the affordable kit of Kingston HyperX Fury 8Gb kit, which is enough memory for this build and to play Fortnite efficiently, but there is room to add more in the future should you want to.

For this gaming pc builds storage, we have an SK Hynix 256GB SSD, which is a great value SSD. Should you want more than the 250GB, then you have that option as well.

The included power supply unit is the EVGA 650 GQ, 80+ GOLD, which has a similar quality, however, it is only semi-modular, which means some of the cords are permanently attached to the PSU (rather than detachable). If you can find the EVGA G1 for a similar or lesser cost then my suggestion would be to go with that.

The PC case included is a newer Corsair Carbide SPEC-06 RGB model, which provides solid quality and a superb look. Depending on your taste, you may be able to save some bucks on a cheaper case, however, I believe the quality of the SPEC belongs here for the cost and quality of this build.

If you have more cash to spend, then you could consider one of the following pieces of hardware below. You can pump up your FPS in Fortnite even further by getting a better graphics card, such as the GTX 1070.

Or you could consider bumping up your RAM, while it most likely will not have very much of an effect on Fortnite performance, it may be beneficial for other tasks, so included is a 16GB kit of the Corsair LPX DDR4 ram.

When choosing the best gaming pc build for Fortnite it really depends on what your performance goals are. If you are simply building a gaming pc to just get up and playing the game, then all you need is a very basic build which can save you some dollars. However, if you do want to pump as much performance as possible, then you will have to splurge a little to get there, but again it’s nothing too crazy.

In the end, Fortnite isn’t the most demanding game in the world, and given its cartoony graphics, it doesn’t look all that bad when the settings are turned down.

Best of luck building the best gaming pc for Fortnite, feel free to ask questions in the comment section below.

If you are looking for other gaming pc build options, then check out our Best Gaming PC Builds of 2018 page.