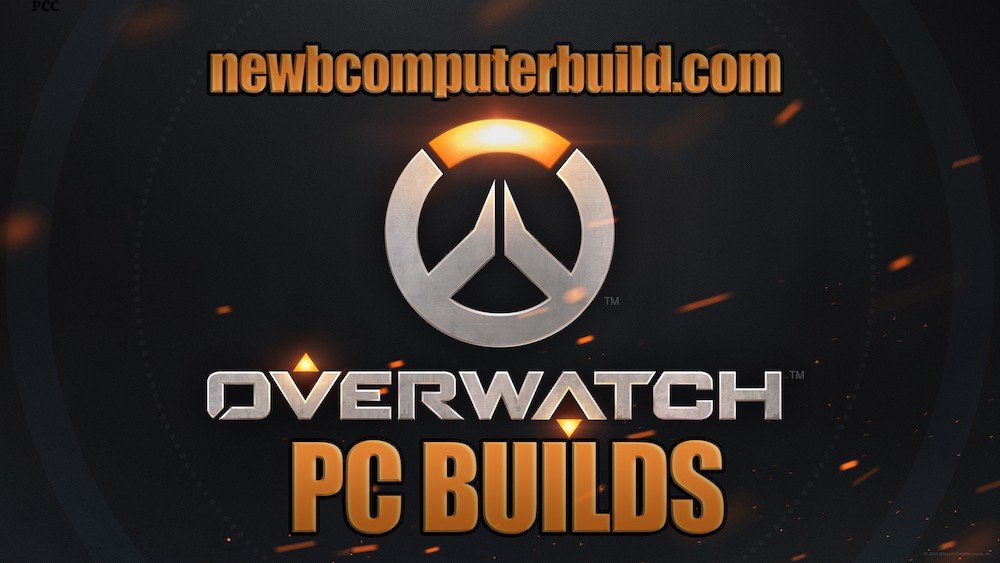 Introduction: Building a PC for Overwatch

Overwatch is a first-person multiplayer pc game that is team based and has gotten very competitive. In overwatch you are given the choice to play one of 21 extraordinary characters in 6vs6 games, which if you are looking to build a gaming pc to play Overwatch, you probably already know this :). Now what you may want to know is what exactly you need to play this game on the highest possible settings so that you get those buttery framerates in order to enjoy the game as awesomely as possibly while also having that edge over your opponents — make sense right?

Here you will find two pc builds specifically for Overwatch. The first is to play at a goal framrate of 60 FPS+ on average at 1080p, and the second build is aimed at a 60FPS+ at 1440P or really good FPS at 1080P. Why these two choice you may ask…well in my experience if you are trying to build a pc for a specific game you  most likely want to at least get really good FPS at the standard resolution of 1080p, and if you have more to spend then you will want to do this with a more expensive 1400P monitor or at 1080P at 144HZ (for those extra buttery framerates). If none of this makes sense to you or if you have any confusion once so ever when choosing the best pc hardware for your Overwatch PC build, then please feel free to leave a comment below.

Here are the minimum and recommended pc requirements for Overwatch, which are only here to give you an idea of what it taks to just get Overwatch up and running. The following have been laid out by Blizzard.com:

As you can see, the requirements are not overly robust and both of the builds below will be over those requirements significantly since i doesn’t take a whole lot of budget to get playing Overwatch on high settings, and high FPS at 1080p and above. Plus referencing Phenom cpus etc is a tad outdated, which is why an Overwatch PC build article is well overdue.

The assumption with this build is that it should support great gameplay in Overwatch at Extreme settings at 1920×1080 with an average of at least 60FPS. Most standard gamers with a basic 1080P monitor with a a refresh rate of say 60hz should choose this build.

This is the PC build for Overwatch that most standard gamers wanting to play Overwatch maxed out at 1080p will most likely need – this is exactly what you should expect to get with this build. Pairing a Ryzen 1300x with a GTX 1050 ti 4Gb graphics card is the perfect duo for this build and based on benchmarks you should get around 104fps 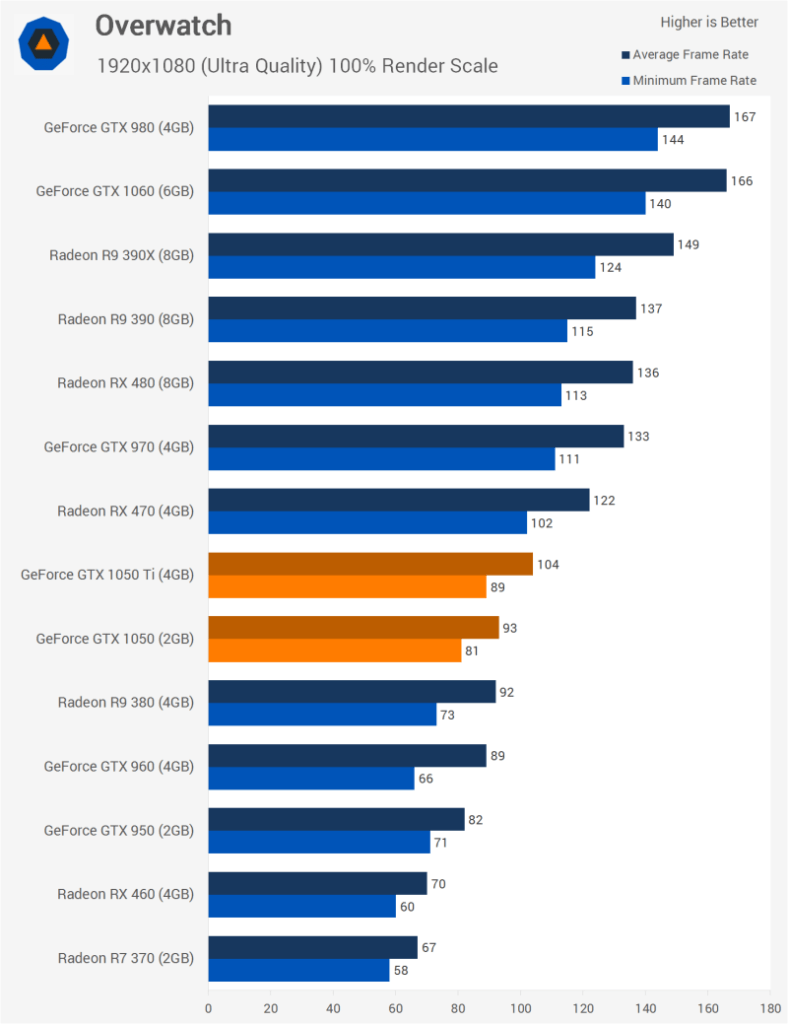 If you look at the above GPU benchmarks from kotaku.com you will notice that the the GTX 1050ti gpu is capable of this kind of performance giving you well over 60fps all the way to over 100fps, which is perfect. I would even suggest this build with the extra recommended gpu in the recommendations below if you have at 144hz monitor as well, as you should be able to push those refresh rates up without a hitch by just upgrading your gpu a bit.

The cpu included is a Ryzen 1300x, which is a great cpu for this game (and many more) and comes with its own Wraith Stealth cpu cooler. With this cpu we have included the GIGABYTE GA-AB350-Gaming 3 motherboard, a full size ATX board that currently comes in just under $100. A list of specifications for the GA-AB350 are (gigabyte.us):

For RAM the 8GB kit of Corsair Vengeance LPX RAM is a great start and is definitely more than the minimum 6GB and will suffice just fine assuming you don’t run much more than Overwatch at one time. If you need more you can always easily bump it up to 16GB later on (see upgrades table).

For the rest of the hardware we have around what you should want or minimally need. Such as a 240GB  SK Hynix SSD, a 650W EVGA Supernova G1 PSU, and a Corsair Carbide Series SPEC-01  gaming pc case.

The build above reflects one that matches just above the recommended requirements to play Overwatch on the PC and at Extreme settings at 1920×1080 resolutions. However, if you want to pump more FPS or make double sure your PC can play Overwatch and more games then these are some of the suggestions I would have over and above the ones in the base build.

To bump up that FPS to over 144 on average  at those extreme setting should have a capable monitor that can support those buttery smooth framerates, you may want to consider going with a GTX 1060 6GB GPU, such as the MSI GTX 1060 seen below. Likewise as mentioned above, if you find you want to run more than Overwatch at one time or find that more memory is perhaps needed, you could bump up your RAM to a 16GB kit of DDR4.

The Best Overwatch PC Build can push the performance limits of Overwatch to well over 60fps (in-fact well over 100fps) at resolutions of 1440p and if you are looking to stay at 1080- resolutions, then well of that 144hz fps mark.

If you are looking to build the Best Overwatch Pc Build then you are looking for performance limits of well beyond 60+FPS at 1440p and well over 144fps at 1080p. This build uses a combination of an Ryzen 5 1600 CPU and a GTX 1060 6GB graphics card adding both modest processing power and graphics capabilities. In fact if Overwatch is THE game you play, you really don’t need to be worrying about splurging on the best of the best as with a $950 budget, you will be maxing this game on premium gaming monitors and at extreme settings. 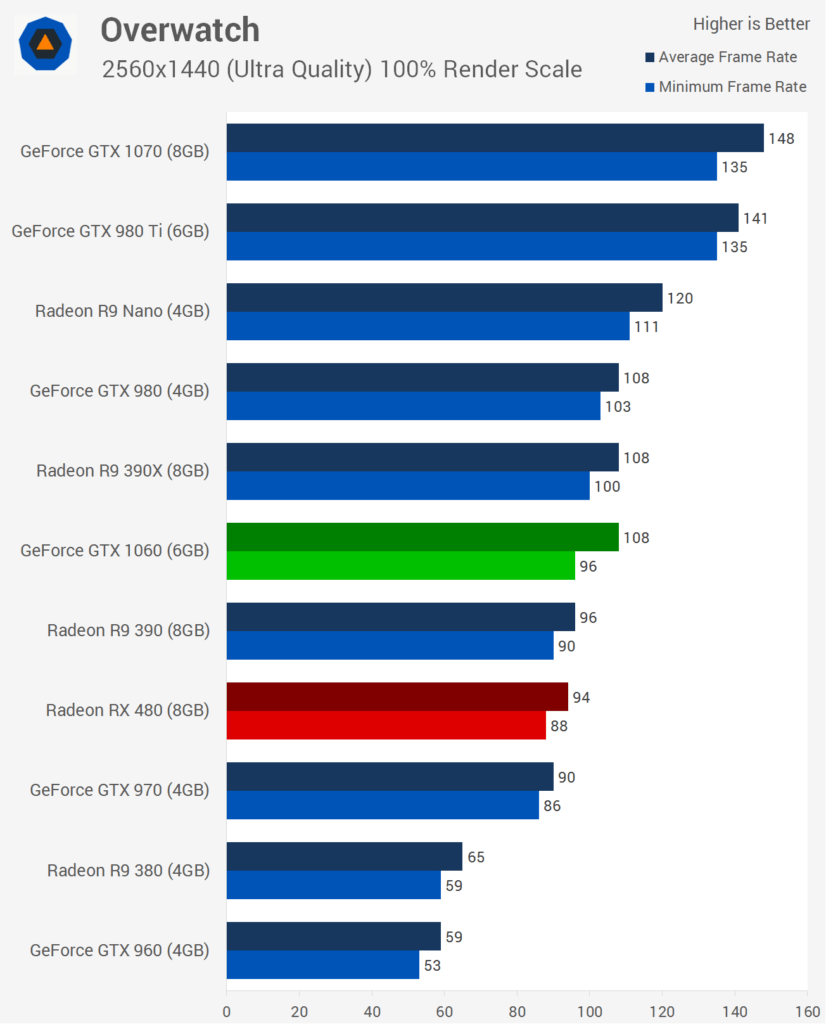 For RAM, this higher end build includes 8GB of Kingston HyperX Fury Black DDR4 RAM. This is a sweet spot in terms of ram and if you find you ever need more, there is space.

For the rest of the hardware we have included the SK Hynix 250GB SSD , but feel free to upgrade to a 500GB version if you need it. Also we have a 750W EVGA Supernova G2 PSU, and a NZXT S340 PC case.

Here are some alternatives or upgrades you could consider to further increase your Overwatch performance expectation with your PC build. Such as you could upgrade your graphics card to a GTX 1070 if you want to game in Overwatch at 144HZ at 1440p, just in case you have a compatible 1440p 144hz monitor. Or upgrade your AM to 16GB is you thin you’d need the extra memory.

When choosing the right gaming pc build for Overwatch it might not be very easy to decipher what you need in order to get the best performance possible, but given the game itself is not actually very hardware intensive, it can be very easy to build a very affordable pc to play Overwatch at the right settings, resolutions and performance for you.

Given the two builds above — both allow you to play Overwatch on Ultra settings anywhere from 1080p to 1440p at an average FPS of at least 60+.

Have fun building the best Overwatch PC build for your budget, or if you haven’t played the game, then get inspired and watch the Overwatch Trailer:

Feel free to ask any questions in the comments below and best of luck!