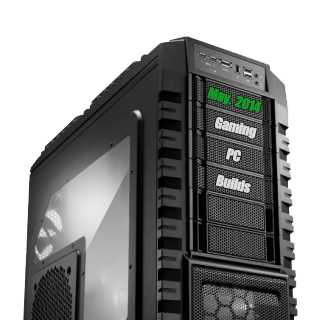 Hello and welcome to the May 2014 edition of the gaming pc builds of the month here at Newb Computer Build. To start off, yes there has been very little going on with regards to any major hardware releases and the past few months, therefore the builds have had little reason for any drastic change. With this in mind I have decided to included a very exciting $2000 build in this months article, so please check that out below. I have also reversed the order of the build this month, so at the top we will be starting with the highest end build ($2000) and move down to the lowest budget build ($600).

The $2000 gaming pc builds for the month of May 2014 is a beast – this is the kind o builds that would chew up anything you throw at it. This builds is one that would be best used with more then one monitor or monitors with high resolutions – which I have included some example in the alternatives section included at the end of the $2000 build section. The build uses a crossfire configuration with a great CPU cooler, 16GB or ram, a fast SSD boot drive and more.

For the rest of the builds ($600, $1000, $1500) the notable changes have been the RAM brands for every build, this was due to price changes. As per usual I have also changed the cases up for every build – I do try to change the cases month to month to showcase any new cases releases as well to profile different case personalities / styles.

So sit back and I hope you enjoy the builds – should you have any questions, comments or suggestions please feel free to leave a comment.

Here we have it, a rarely seen build on the Newb Computer Build site, a $2000 build. I thought that since the other three builds have not changed a whole lot in the last little bit, that I would mix things up and put in a killer $2000 gaming pc build.

This build will rock and game at resolutions 2560×1600 and beyond. Furthermore, it would be a great choice build for those that like to game with multiple monitors, with high resolutions and high frame rates.

The $2000 build comes with the i7 4770K processor, which I have rarely included in any of the gaming builds. This processor is a great fit considering upcoming games such as Watch Dogs, that have recommended an Intel i7 to play with Ultra specifications. With that, the included graphics card(s) is a pair of XFX Black Edition Double D RADEON R9 290, that are paired together in Crossfire. This bundle is what will rock through any game and still so with multiple monitors. If you would like to check out some benchmarks for a Crossfired pair of Radeon R9 290’s, then check this article out at Guru3d

The included cooler is the Noctua 6 NH-D14 cpu cooler, which is a great cool especially for its cost – check out this Tom’s Hardware article for an in depth take on the Noctua NH-D14 when compared to four closed looped cpu coolers.

For most of the builds I usually include an alternatives section to include some hardware you may want should you have some extra to spend, or if you want some future upgrades. For the $2000 build I include a couple of higher resolution monitor examples to give you ad idea of what you can get to maximize this builds potential; Keep in mind that you can also use multiple monitors with this build quite well.

Furthermore, I have also suggested a bigger solid state drive or perhaps even more graphics power by putting to GTX 780’s in SLI.

Same power with similar hardware – the $1500 stands to be changing very little once again. As per usual I try to focus purely on maximizing the power of a build in its respective budget. There are other pieces of hardware you could add to make it a more premium build, such as water cooling, however the budget just doesn’t allow for it the way I chosen the hardware.

The $1500 build for may includes the Intel 4670K paired with a GTX 780 graphics card. With this duo, you can expect fantastic game play even on resolutions of 2560×1600. Pair the 4670k with the ASUS MAXIMUS VI HERO motherboard and a cooler like the Cooler Master Hyper 212 EVO and you have some pretty capable overclocking potential.

With the added Samsung 840 PRO 128GB solid state drive, you will have amazing boot /load times, as well still have a ton of storage with the 1TB Western Digital Blue storage.

The case used this month is the Corsair Carbide Series 400R. Yes, it is a cheaper case then what is included in the $1000 build, however in order to fit within budget compromises had to be made. However, do not be mistaken, the Corsair Carbide 400R is a very capable mid tower case with the following features –

Should you want some more case recommendations, you can go with the recommended Fractal Design R4 in the $1000 build, look in the alternatives section below or see the case options from the previous couple of months.

If you have a little extra to spend on the $1500 build, then below are a few suggestions. For those of you who do much more then game, then an Intel core i7-4770K may be a worthy upgrade to ease video or graphics work. Or if you simply want to increase you graphics card potential, then you can SLI another EVGA GTX 780 or purchase a single more powerful graphics card such as the GeForce GTX 780 Ti 3GB card. Or for those of you who want to dedicate more storage space solely to your SSD, then perhaps a larger 512GB Samsung PRO SDD is a worthy upgrade.

Also, please *note that if you do decide to SLI with another GeForce GTX 780 3GB graphics card, you may want to also upgrade the power supply unit to 850W (ie. Corsair RM 850 Watt)

Another $1000 build, with some very subtle changes from the previous month. I’ve reverted back to the MSI G45 Gaming series motherboard since it’s price seems to have subsided again – which is good! The MSI G45 supports SLI and Crossfire, so if you were looking to upgrades later on, you would have that option.

The RAM used is a change to the Kingston HyperX Red, a change due to the match in price to the previous Kingston HyperX Blu. The build uses a GTX 760 paired with the Intel 4670K unlocked processor, which you can expect to play most games maxed out at extreme settings with resolutions of 1920×1080.

The case used is the Fractal Design R4, a minimalistic, quiet case. Below are some of the Fractal cases specifications –

Below are some hardware additions should you have some extra cash and want to upgrade a specific piece to the above build.

Since there is no SSD included in the base $1000 build I do suggest you highly considering one if you funds allow. The Samsung 840 PRO series is a great high quality SSD and 128GB is a perfect starting point to use is as your boot drive with some of your most used apps / games. For those that simply want more space for large sums of media etc. you could consider getting a 2TB drive (doubling your space) with the Seagate Barracuda 2TB drive below. For those of you that do some serious gaming or are considering gaming at higher then 1080p resolutions then you might want to consider bumping up your graphics cards with either an upgrade to a single GTX 770 or better yet getting a second EVGA GeForce GTX 760 and SLI’ing your cards.

Also, please *note that if you do decide to SLI with another GeForce GTX 760 graphics card, you may want to also upgrade the power supply unit to 850W (ie. Corsair RM 850 Watt) – Just to be safe – although you could probably get away with the included 750 Watts; up to you!

(Game at Smoothly with Medium – High settings at 1920X1080 resolutions)

The $600 gaming pc build this month comes with the AMD FX 6300 and the Radeon R7 265. A perfect combination of power for this $600 budget gaming pc build. You should be able to get great performance at Medium – High settings in most games.

The motherboard used is the MSI 970-G46, a budget board that can support everything in this build nicely. One slightly different piece of hardware this month is the Kingston HyperX Red Ram, slightly faster then last months Kingston HyperX Blu, then just happen to align with the exact same price this month. The rest of the build includes 1Tb of storage with the Western Digital Blue, a Corsair CX Series 600Watter power supply, a cheap budget Apex pc case and an LG optical drive.

These upgrades and alternatives below are for anyone who may have some extra spending cash or want some ideas for future upgrades.

The upgrades and alternatives this month include an upgraded eight core AMD FX-8320 processor, a Cooler Master HAF 912 Mi Tower Computer Case, a better graphics card the Gigabyte R9 270, or a nice boot drive with a Crucial M500 120GB SSD.