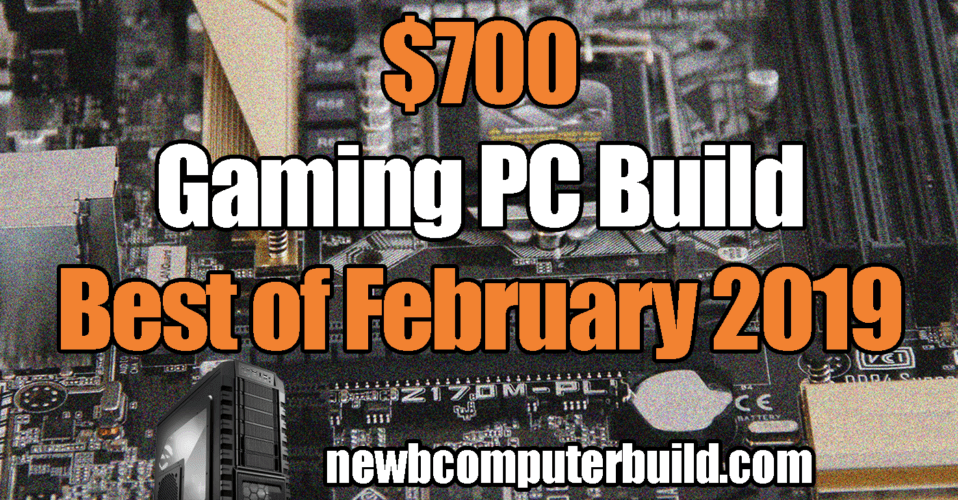 If you are in the market for the best possible pc build for $700 this February 2019, then here it is. The $700 pc build is for those who want a budget pc build capable of playing games really well at 1920×1080 / standard HD resolutions. This is would be the perfect build for those wanting to outperform any console out there without a hiccup with plenty of room for upgrades in the future.

Last month we saw the biggest changes to the best $700 gaming pc build and this month the build stands strong. For February 2019 the CPU powering this rig is the Ryzen 5 2600 CPU, and a very capable RTX 580 graphics card, making this a very powerful $700 / budget 1080p resolution pc build.

The graphics card gets a major bump this month with the RTX 580 8GB (specifically the Sapphire Pulse RTX 580). This card has so much potential when gaming at 1080p, and you should expect to max out most games at 1080p resolutions.

The RAM included is a kit of Corsair LPX 8Gb RAM (the same as in the $1000 pc build) which is enough memory for most gaming pc builds, and you always have the option to upgrade more in the future if need be with the extra couple of slots on the included motherboard.

The storage included is a Kingston Digital 240GB solid state drive SSD. This is a great start in terms of storage speed and capacity and is an increase in storage capacity compared to the $700 pc build in previous months. Is 240GB not enough storage for you? Then add more or save for more in the future (see the hardware alternatives for options).

The included power supply unit in this pc build is the reputable and affordable Corsair CX Series, CX500, with enough juice to power this build and for a good cost for cheap.

Finally, for the PC case in the $700 gaming pc build — we have the Fractal Focus G. This case is a sophisticated, elegant case that provides a compact, smart layout for your pc hardware.

Features include (learn more on the Fractal Focus H specifications page at fractal-design.com):

The above are upgrades to the February 2019 $700 gaming pc build. That is if you have more to spend than a $700 budget for this gaming pc build, these are some options for you to increase your overall gaming performance. There are some significant upgrades above including the CPU and graphics card – and even further, if you upgrade the CPU you could also upgrade the motherboard for an even more overclocking capability for even more of a performance boost for nothing.

The CPU upgrade suggested is an AMD Ryzen 5 2600X, this could be a slight upgrade in computing power and it overclocks quite nicely (in order to do so, please also upgrade the motherboard).

If you are looking the simplest performance upgrade, then you could consider upgrading the graphics card to an RTX 2060 graphics card, which is a fantastic card and is also included in our February 2019 $1000 gaming pc build.

You could also increase your storage space by going with a larger capacity 500GB Western Digital 3D NAND SSD. This would be recommended if you think you will need more than 120GB as included in the SSD in the base build above.