As a side note* I have decided to start a Star Wars: The Old Republic wiki. You can visit / create an account / help add content by visiting http://swtorwiki.info/

I was invited for the Star Wars: The Old Republic Beta the weekend of November 25-27th 2011 and it was very exciting. Why? 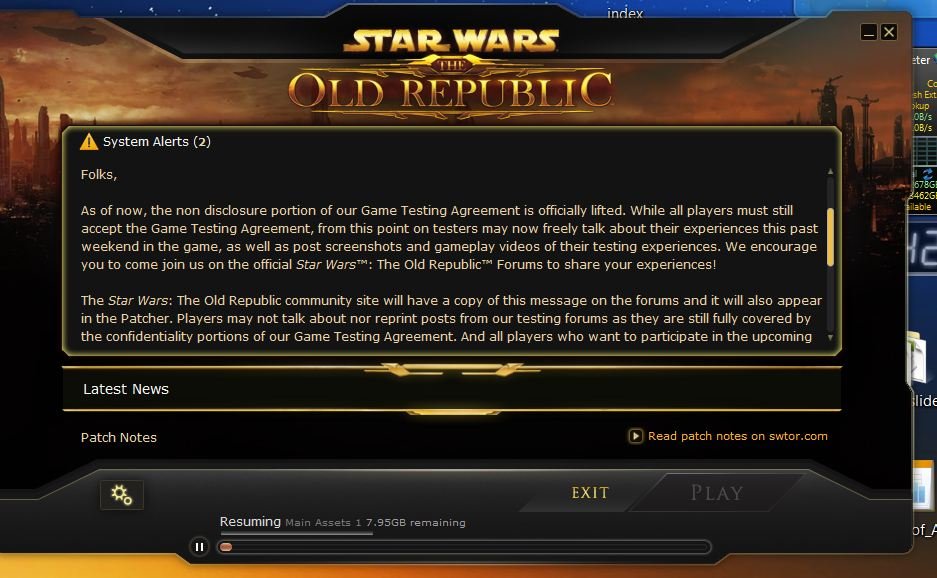 At 10 AM November 27th 2011, I was granted access to play SWTOR and so I did. This page includes all of the gameplay media that I managed to put together throughout my gameplay. This weekend is the first weekend where Bioware has lifted their Non-Disclosure Act for the SWTOR beta, so I wanted to share my initial experiences of the game.

After playing this game for the first time, I have to say I was more than impressed. I already had high hopes and expectations for SWTOR and playing the beta actually surpassed this.

The beginning cinematics were just amazing, the feel was very welcoming and there was never a shortage of something to do. For those of you who have played World of Warcraft you will have a very nostalgic feeling to SWTOR’s gameplay as the game dynamics feel very familiar; to me this was such a wonderful thing since I had to do little learning to start playing yet the game had a totally different world of play.

One thing that stood out to me what the players interaction with mission giving NPC’s etc. As the communication here was very dynamic and interactive.

When communicating with NPC’s it was almost cinematic like with every new interaction, plus your play is usually given three different ways to respond back in conversations with the NPC’s. Usually, when communicating back you are given a more positive response, a neutral response, and a sarcastic one.

What I found really engaging was that you reponses can effect how your character evolves. Sometimes the more sarcastic (selfish) response gains you negative points pushing you more towards the dark force (as I was a Jedi Knight character).

The introductory cinematic to the Galactic Republic.

The very beginning of the young Padawin Jedi Knight’s journey. The initial SWTOR gameplay begins in Tython’s wilderness. This is party of the Star Wars: The Old Republic gameplay during the stress test weekend.

The first mission in SWTOR “Attack of the Flesh Raiders” from Star Wars: The Old Republic Beta Stress Test Weekend.

SWTOR Beta gameplay. Doing the flesh raiders mission as a Jedi Knight. Right at the end of the mission.

First entrance into the Jedi Temple. Get to fight some test droids, then talk to the Jedi council.

Creating a Sith Warrior in the SWTOR Beta. Goes through the character creation screen into the first landing on Korriban.

Playing SWTOR beta doing “The Face of an Enemy” mission as a level 6 Jedi Knight.