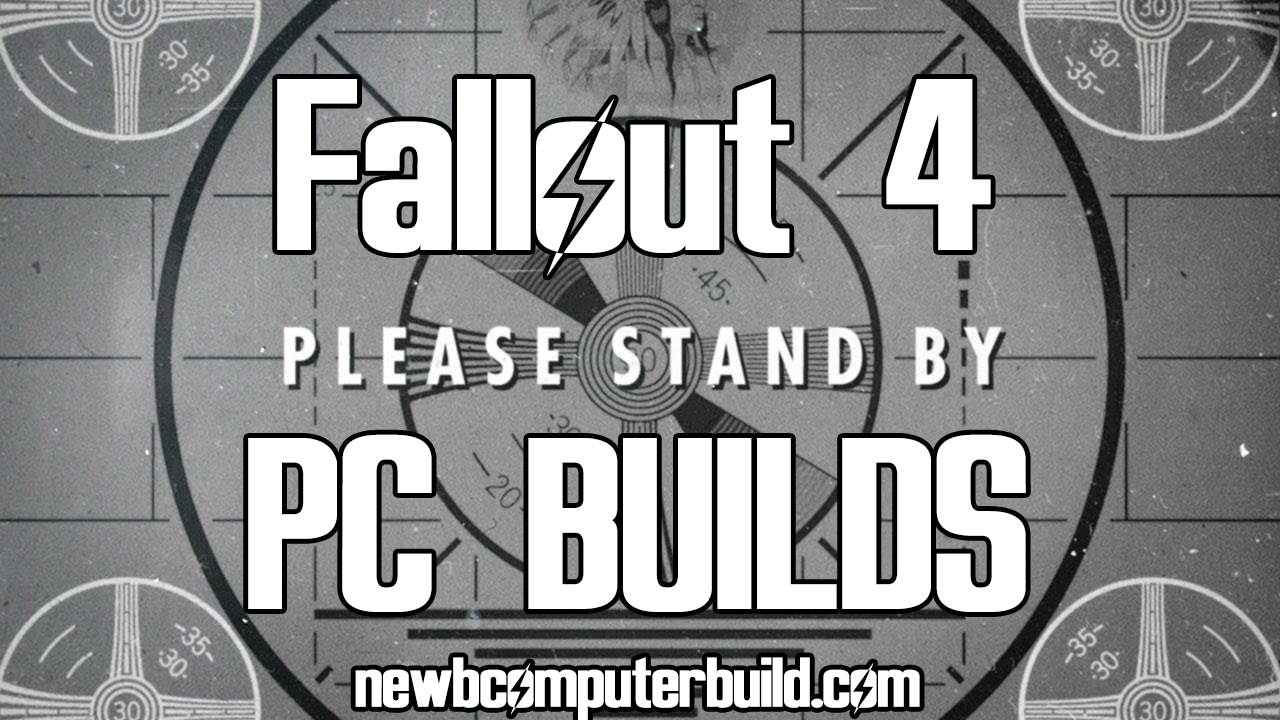 Hello and welcome fellow Vault 111 survivors. In order to traverse this excitingly splendid world of nuclear wasteland, you may be interested in what it’s going to take to power your journey. These builds are based on the Fallout 4 PC requirements you see below and on the most recent benchmarks for the game as shown in the supplied chart below. This will help you choose the hardware you need to both play the game and to play on the highest settings. The good news on the system requirements front is that it looks like Bethesda has given the game a wide spread in terms of hardware from the minimum to recommended requirements, so most PC’s with a decent card should be able to play the game, but here we’re aiming for maxing it out.

The following builds are based on the benchmarks done by gamersnexus.net and below you can see Fallout 4 benchmarked on various graphics cards.  The builds below are based on a 60 frames per second performance threshold, so please if you want to still play the game on max, I would still consider any graphics card that performs with 40fps+ a good performing system. 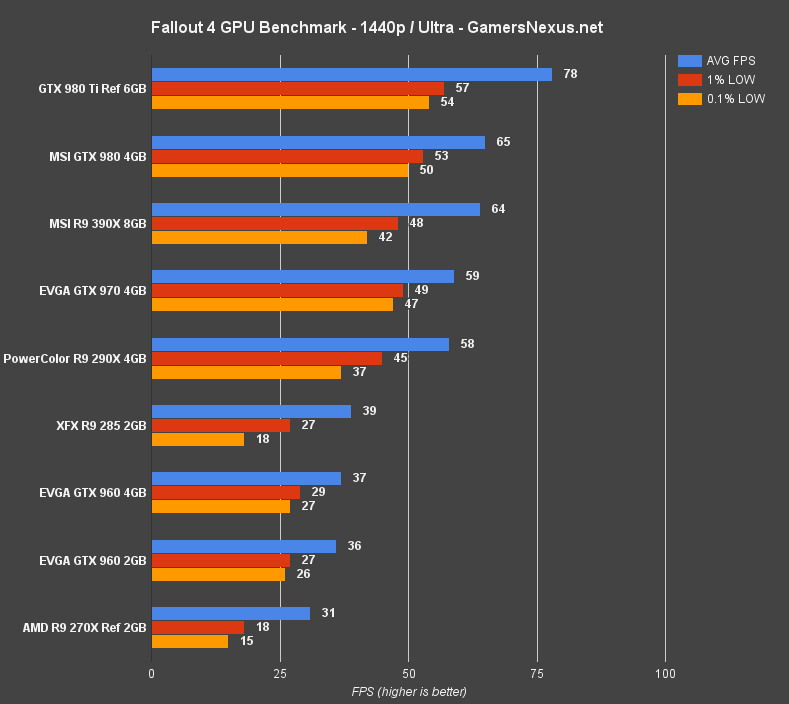 If you want to learn more about Fallout 4 you can do so at fallout4.com and if you haven’t already done so, you can purchase Fallout 4 here.

Sure you will be able to play Fallout 4 with lower hardware specifications, especially when compared to the requirements set out for the game, but if you are going to be building a brand new gaming pc, you might as well make it an up to date build worth building and capable of giving you a great bang for your buck gaming experience. This build will play fallout 4 maxed out with 60 frames per second at 1920×1080.

This build is a fantastic choice for those who want to play Fallout 4 smooth as butter at 1920×080 on max and includes the newest of the Intel line of Skylake processors and the more then capable GTX 970 graphics card – which will actually get you nearing 80fps according the the chart in the introduction to this article. The next nearest card is the R9 285, which is still a viable card for this game, but when benchmarked it doesn’t quite hit 60fps, which is playable but not the goal of this article.

The included processors is the Intel i5 6500, a new skylake processor. This is the more affordable version of the i5 6600k I’ve included in the recent monthly gaming pc build articles, although it is not unlocked like the 6600K, so overclocking won’t be as simple – this should be fine for non enthusiasts though.

I’ve included a Cooler Master Hyper 212 CPU cooler since there is simply no stock cooler included with the cpu, this cooler will be more then enough.

The included motherboard is the Gigabyte H170 Gaming 3 board, perfect enough for this build and fits perfectly with the Intel i5 6500 cpu, since there is no need for overclocking, which makes the cost of this board even better.

The included Sapphire R9 380 should pump out enough juice to play Fallout 4 on high settings at 1080p, which fulfills a higher requirement then the minimum specifications for the game, although lower then its recommended.

For both the minimum and recommended requirement the game specifies 8GB of ram. Well, included in this build is 8GB (two 4GB sticks), although I will do you one better with 8GB of DDR4 RAM. This is not only compatible with the current motherboard, but an upgrade to most builds using the latter and previous DDR3 RAM.

For a hard drive we have a 1TB Seagate HDD, more then enough space for Fallout and 0plenty more for storage, although this is no SSD, which may cost you more. The power supply is an EVGA g1 650 watt, which is a reputable PSU with more juice then you need.

The PC case included is a Thermaltake V3 Black Edition PC case with the following specifications:

And finally, I have included an Asus optical drive for those that need to install software via CD / DVD or write to, but these days I would recommend moving on and installing your OS / software via USB or otherwise; it just takes less space in your case.

This is the build to build if you are a serious Fallout 4’er, is that a thing? In all honesty though, this build may be a tad overboard for most and in fact may be a tad overboard for Fallout 4. This build does appease to the recommended requirements specified by Bethesda for Fallout 4 and more then enough fo the above included benchmarks, but it will play max settings 2560×1440 resolutions with far more then 60 frames per second.

So…if you are looking to play Fallout 4 and most of any game maxed out, this is the build for you.

The Included processor is a new Skylake Intel i5 6600K, fully capable of overclocking and a very capable processor for gaming. Fallout 4 will take advantage of an i7 processor more then most games, but there is no need should you just want to max the game out at 2560×1440 at 60fps – perhaps more for those that are interested in 4k gaming.

Like the last build, included is the Cooler Master Hyper 212 EVO cpu cooler. This is included not only because the 6700k processor has no included cooler, but because this is one of the best most affordable coolers capable of even overclocking the best processors.

The included motherboard is one of the more affordable quality motherboard, the ASUS Z170-K.  This motherboard fully supports the new Skylake cpus, as well as being more then capable of overclocking such cpu’s. This motherboard also gloats the following overview – (Read more: Asus.com)

The included graphics card is the ASUS Strix R9 390X graphics card. This card fully supports the recommended requirements for Fallout 4 and is more then capable of gaming with the best of the best of modern games. This card should play the game maxed out at 2560×1440 resolutions with 60+fps. Realisticlly though, you can almost get this performance using the first builds GTX 970, so please keep that in mind when deciding on which build to purchase, as this could save you some cash.
For both the minimum and recommended requirements for Fallout 4, there is a requirement for 8GB RAM. Included in this build is 8Gb (two 4GB sticks) of Cucial Ballistix Sport DDR4 Ram. That’s right, DDR4 RAM, the newest generation of RAM, which is another reason to recommend the most modern of builds for a game like Fallout 4.

The included hard drive is a Seagate aTB HDD, yes plenty enough room for Fallout and plenty more, but I do recommend a Solid State Drive more premium loading and writing speeds. This drive is a great drive although it will cost a tad more for an SSD, but it’s not pertinent.

For a power supply we have a EVGA Supernova G1 650 Watt PSU, this has the perfect amount of juice for this build, that is unless you plan on adding two of these in the future. No matter though, for this build its enough juice and will work perfectly for any Fallout 4 build.

The PC case was chosen as a reputable case, the Antec Three Hundred Two Gaming case and to try and keep costs minimal if your goal is to maximize performance per dollar spent on the overall hardware.

Lastly, I have included an Asus optical drive. This drive is not included in the base cost for the build, but some may want it. You can either install your operating system via a USB stick or install is via DVD. Honestly though, I have no use for one of these anymore and no longer feel the need to recommend one, so up to you!