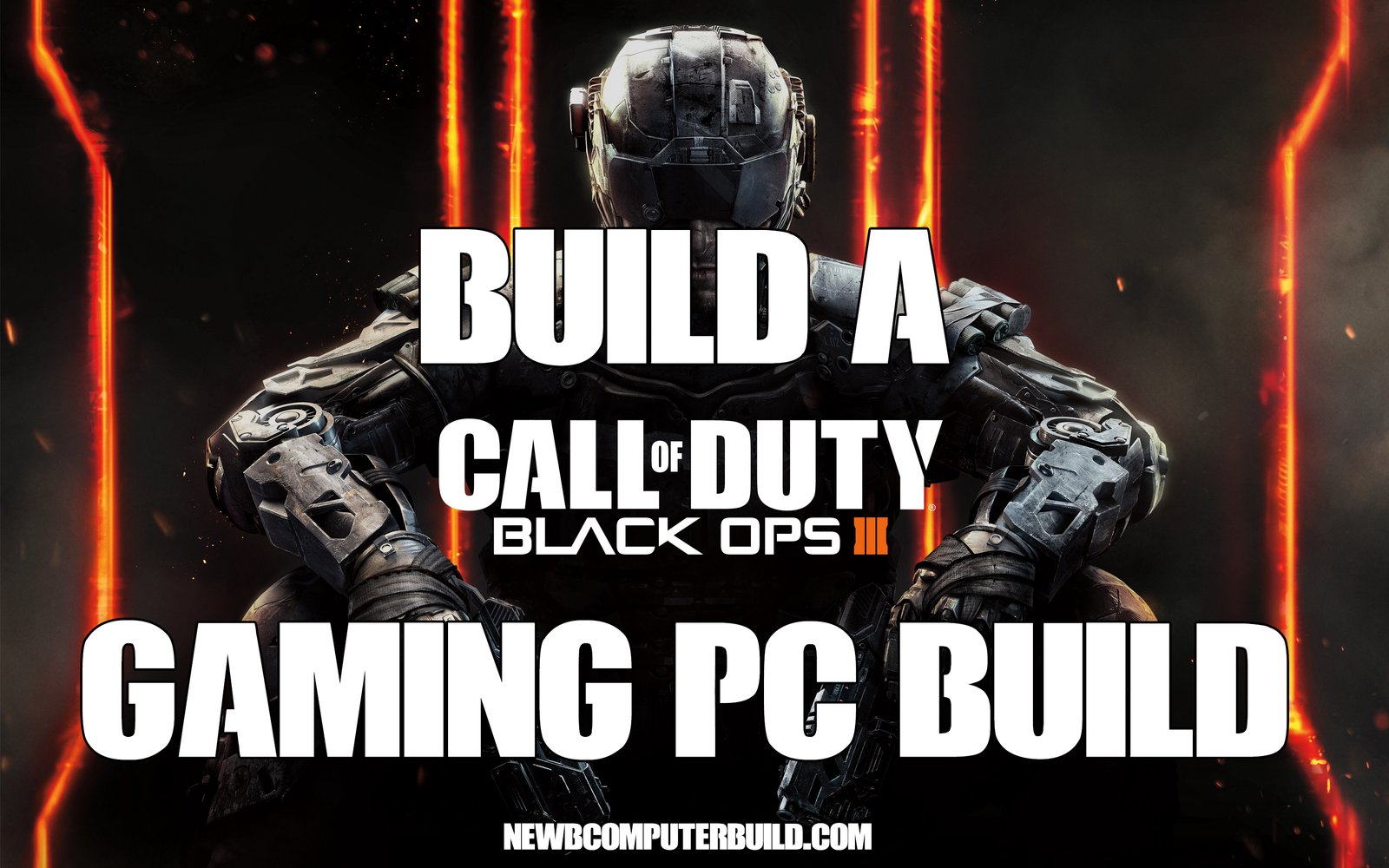 Call of Duty Black Ops 3 takes place in a dark gritty future where a new breed of Black Ops soldier emerges and the lines are blurred between our own humanity and the cutting-edge military robotics that define the future of combat (learn more: callofduty.com).

In this article you will find two gaming PC builds for those that are planning a new pc build specifically for Black Ops III and games alike. The following builds are designed to play Black Ops III maxed out with around 60 frames per second at resolutions of 1920×1080 or 2560×1440 – depending on which one you choose. The builds are backed by others who have benchmarked the game and even through recommendations outlined by GeForce.

Here are some benchmarks taken from Guru3D.com on Black Ops III with the three resolutions of 1920X1080, 2560X1440 and at 4K. The below chart  can be used as a reference point when looking at the included builds here and perhaps for those wanting some performance indicators using specific graphics cards. 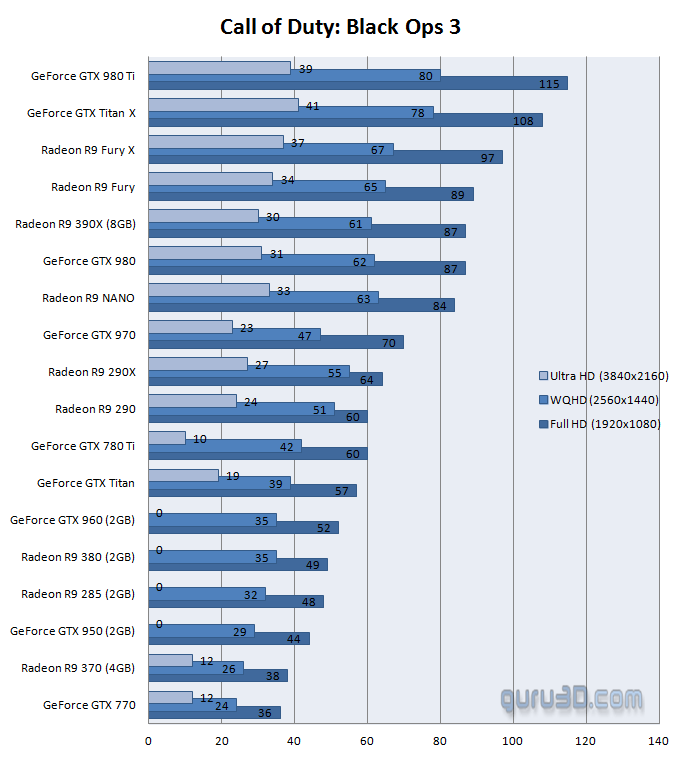 Each of the builds have been designed to keep costs to a minimal while maximizing performance, so that you get the most per dollar spent. Feel free to start a conversation in the comments section below, ask questions in case you have other build specifications you are unsure of and most of all enjoy playing Call of Duty Black Ops III to its full potential.

And if you haven’t already, you may also want to purchase Call of Duty Black Ops III for PC.

This build is designed for those wanting to play Black Ops III with max settings with around 60 frames per second using a 1920×1080 resolution monitor. Using this build more then fulfills the recommended requirements for the game and there are benchmarks proving the use of the GTX 970 as being able to achieve an average of 60FPS playing Call of Duty Black Ops III at 1080p.

The goal of this build is to achieve the outlined specifications above so that you are able to get the hardware needed at the best price. Essentially, all of the hardware included are watered down versions of what I would generally include in the gaming pc builds of the month articles (this would be version of the typical $1000 build included there), such as the CPU is a watered down skylake CPU compared to the Intel 6600K, as the included Intel i5 6500 is a locked processor, not able to easily overclock and is clocked a little less at 3.2Ghz, which does provide significant cost savings overall.

For the graphics card, we have an EVGA GeForce GTX 970. This is is the major performance driver for Call of Duty Black Ops III – specifically at max settings with 60fps with 1080p resolutions. Looking at the benchmark chart provided in the introduction of this article, you can see that the GTX 970 is the sweet spot for Black Ops III – and not to mention GeForce also mentions the GTX 970 as the graphics card to use in their Call of Duty Black Ops 3 Graphics & Performance Guide.

We have 8Gb of DDR4 Crucial Ballistix Sport RAM included in this build – 8Gb being two more GB required then the minimum for Black Ops III and the recommended amount. In Guru3d’s Call of Duty Black Ops III PC graphics performance benchmark article, they mentioned that 8GB RAM memory systems will get full RAM utilization as if the game is caching to the max, which makes this the perfect amount of RAM to start with and for this build.

The included storage is a 1TB Seagate Hard Drive, you could opt for an SSD for not much more (like the below build), but you will sacrifice some storage. And the included power supply is an EVGA SuperNOVA 650 G1 psu – this is a tad more power then you need, but for its cost and efficiency, I think it’s well worth it.

Finally, the case chosen for this build is the Corsair Carbide Series 200R, a compact mid tower pc case. This is a simple compact case that is extremely easy to work with. To learn more you may visit the Carbide Series 200R product page at Corsair.com.

This build is for those that want to play Black Ops III at max settings with 60 frames per second on up to 2560×1400 resolution monitors. Benchmarks have shown that the GTX 980 is fully capable of achieving a 60FPS average when playing Black Ops III at 1440p, so if you plan to play at higher resolutions then this build is recommended for you.

The CPU used is an unlocked Skylake Intel i5 6600K processor – this means that you have a fantastic processor that is easily overclocked. To keep this cpu’s temperatures down, also included is a Cooler Master Hyper 212 EVO cpu cooler, which is needed since the 6600K cpu doesn’t come with a stock cooler either.

For a motherboard we have a Z170 ASUS Z170-K – a solid new generation board capable harnessing the power of the included Intel 6600K cpu and has the following specifications as outlines by Asus.com –

In order to achieve the max setting 60FPS frame rates at 1440p, I have chosen to include the above EVGA GTX 980 graphics card. Through benchmarks (such as those shown in the chart in this articles introduction) and as outlined by GeForce.com, the GTX 980 is capable of 60FPS in resolutions of 2560X1440, making this the perfect card for these specifications in Black Ops III.

Included in this build is a 16Gb kit of Corsair Vengeance LPXD DR4 RAM. I’ve decided to pump of the Max 1440P Black Ops III build to 16Gb since the game has been said to fully utilize 8Gb of RAM and that in a “…16GB system things definitely felt and ran a notch better” (guru3d).

The included storage is a 250Gb Samsung EVO SSD – this will make sure your load time on your overall system are super quick, including your OS boot times and the games actual boot time. You can always bump the storage of this SSD up or likewise, purchase the 1TB drive featured in the 1080P build above along side this SSD. The included PSU is an EVGA SuperNOVA 750 G2,  which is plenty of power, fully modular and an overall great PSU.

The case chosen for this build is the green version of the Phanteks Enthoo Pro M – this is a high quality popular mid tower case (also available is a full tower model of the Enthoo Pro). The specifications of this case as specified by Phanteks.com is –

I hope that if you are looking to build a pc or are upgrading your pc to play Black Ops III that you were able to get some value out of the couple of builds above geared towards those wanting to max the game out with ideal fps. Keep in mind that these builds are flexible, and that you may tweak some of the hardware depending on your given budget. You can always reference some of the benchmarks such as those shown in the introduction if you have another graphics card in mind for example. Or perhaps you need extra storage in the 1440P build, then by all means purchase a cheaper 1TB HDD on top of the already included SSD (as Black Ops III does take up to 60GB of space alone).