Since StarCraft II was released back in July 2010, I have been playing it like I was back in 1998 when the first StarCraft was released. Oh to relive some of my youths video game binges! What I would like to cover in this article is somewhat of a personal benchmark, and insight into what exactly is required to play StarCraft II on the highest possible settings. This includes the January 2011 patch 1.2.0 addition of an Extreme setting for Graphics Quality, and the rest of the graphics options set to their highest relative settings of Ultra and High as seen here: 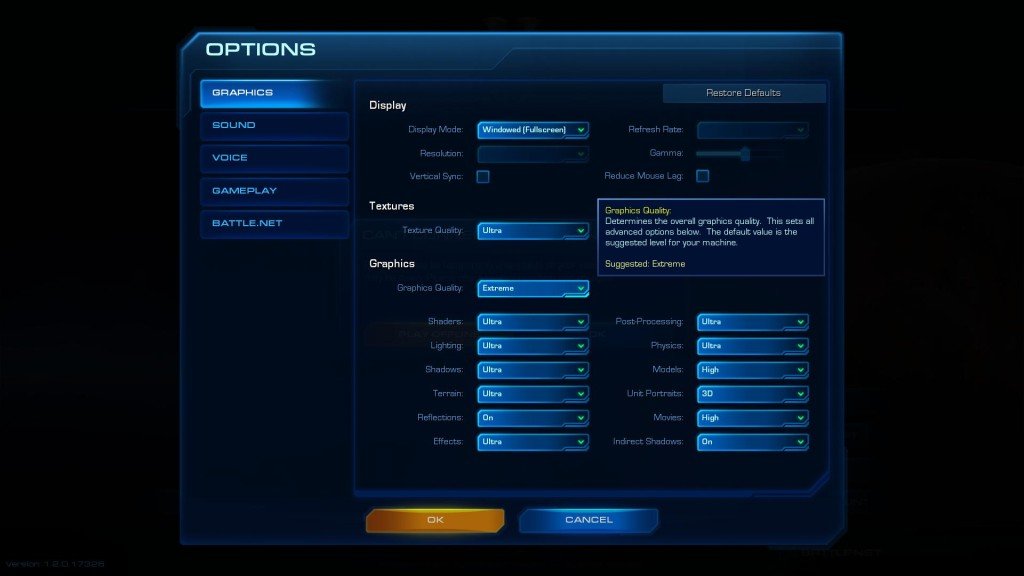 When Blizzard released patch 1.2.0 back in January 2011, they added the Extreme graphics quality option, which included “Space Ambient Occlusion“, which was first introduced and used for the first time in 2007 with the release of Crysis by Crytek. This essentially allows an ambient occlusion solution (adding realism by approximating the way light radiates in real life onto a graphical model) that is independent from a scenes complexity, no data pre-processing, no loading time, no memory allocations in system memory, works in dynamic scenes, works the same for every pixel on the screen, and has no CPU usage – instead an execution completely of a GPU.

With all that aside, I would like to benchmark my computer system against StarCraft II with all the highest settings. I have a pretty basic PC hardware build that allows me to play with the highest graphical settings, and I will show at what efficiency in a moment. I hope that you will be able to use my hardware as a baseline to further your understanding of what hardware specifications you would need to aim for in order to play StarCraft II on Extreme/Ultra settings without too much lag.

To start off I think its best that I list the minimum and recommended StarCraft II system requirements:

*Note: Due to potential programming changes, the Minimum System Requirements for this game may change over time.

If you just barely have the recommended system requirements, then obviously you will not be able to play StarCraftII on the highest graphics settings. This is because Blizzard indulges in diverse hardware configurations and every game is shipped as PC / Mac compatible, making Blizzard Entertainment wonderfully inclusive.

My hardware and system configuration is as follows:

In my case, I play with a monitor resolution of 1920×1080 with the following hardware/system specifications:

PassMark Comparison:
First, I am going to compare my hardware/system to that of the reccomended system requirments set by Blizzard for StarCraft II. I am going by the assumption that this is the minimum system requirements required to play StarCraft II smoothly on the lowest settings. I will do this by comparing my CPU PassMark Value, and my Graphics Card PassMark G3D Rating to the CPU PassMark Value and Graphics Card PassMark G3D Rating for the minimum required components.
(*Note: To get a better understanding as to what “PassMark” Values/Ratings are please visit PassMark: It is a website that has a huge database of benchmarked CPUS, GPUs, HardDrives etc.):

*Larger Passmark Values are better
To conclude the top table I can arbitrarily calculate a percentage comparison of my components to the recommended components. I believe this can serve as a  ball park guess as to where my computers specifications stand without even playing StarCraft II:

An average of a 66.87% increase in a PassMark score over the recommended StarCraft II hardware requirements is pretty significant, which is no wonder I can pull out Ultra / Extreme graphics settings for StarCraft II.

Next, I will post some benchmarking data calculating a 60 second average Frames Per Second while playing StarCraft II using my computer as is: 1920×1080 resolution, and all graphics pumped to the highest.

The final result is an average 60 second frames per second of 56.783. This is good rate of FPS in my opinion, and very playable; this provides a really smooth StarCraft II gameplay. In General, the greater FPS the better your gameplay will look, and the greater your average FPS the smoother your game will run. If you want to read an in depth article on the human eye and FPS, check out Human Eye Frames Per Second. I came across it while writing this article, and was an interesting read.

Being able to play StarCraft II on Extreme / Ultra settings is a really satisfying experience, and with the final results of my comparisons / benchmarks I hope you can use this data as a baseline if you are choosing hardware specifically to play StarCraft II, or related games. You could essentially build a system $200 cheaper than what I currently have (which I am guessing is currently valued at ~$550) and still run StarCraft II on lower settings for example.

If you follow the methodology I used in this article, you could even predict a ball park figure of what settings you could play any given game. Just compare the PassMark score of the specific hardware you have in mind, to the recommended system rquirements of your prospected game and judge for yourself.

Thanks for reading: If you do not already own StarCraft II Please I urge you to:

Build Your Own Gaming PC to Play Starcraft II: