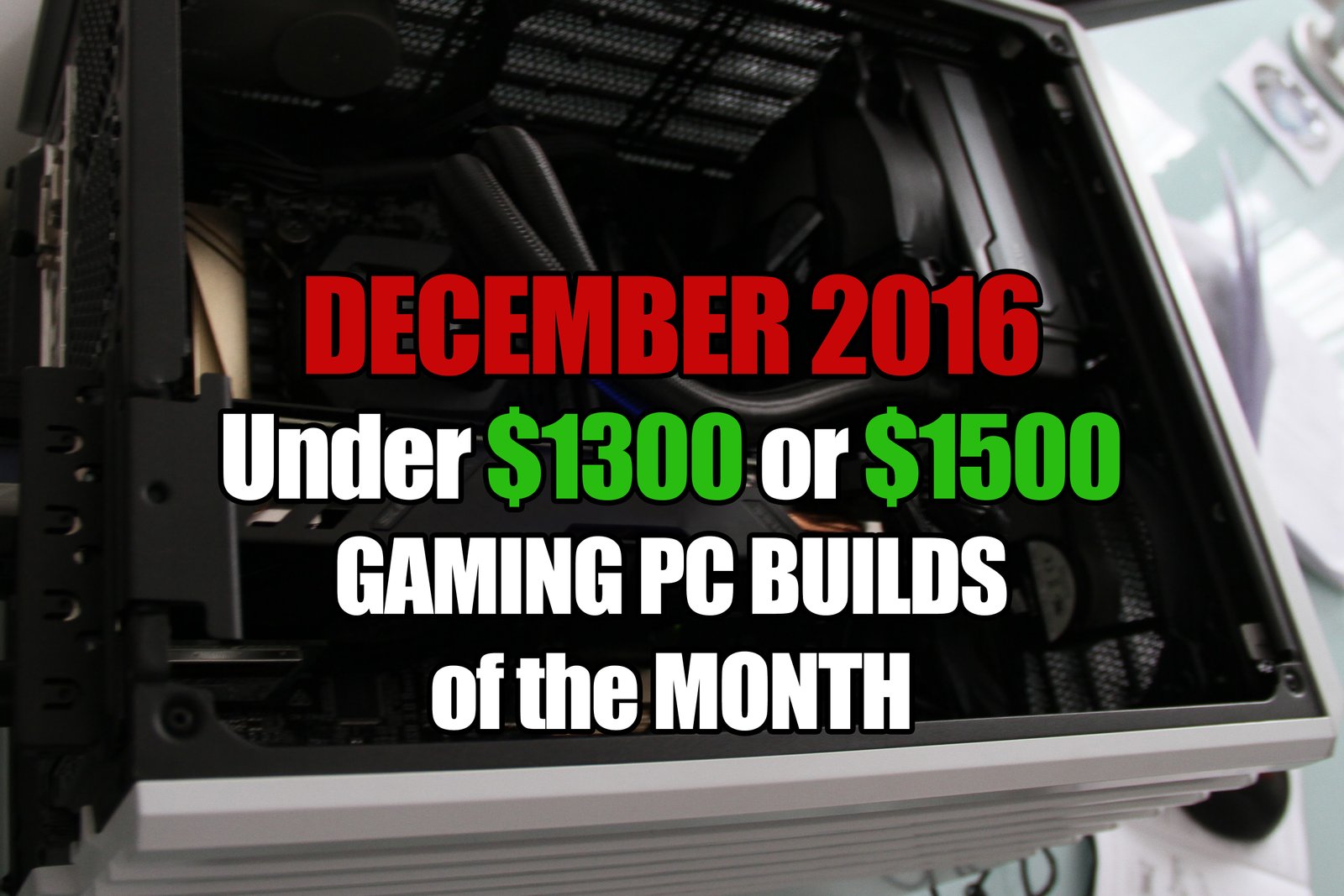 Here we are introducing the very final gaming pc build of the month for the year 2016 – the build you will see below ranges from being under $1300 to under $1500. The only difference between the budgets depends on precisely which graphics card you end up choosing. Why two graphics card you might say – well first and foremost your choice will depend on your budget and secondly you may want to play games at higher resolutions with a better bump in performance (if you go with the GTX 1080) than should you choose the GTX 1070 card. There have been several changes to the overall build you will see in the below table, of which there is a full explanation and overview as you read on in the article.

Should you have any questions with this build, or even an adaptation of this build of your own, then please feel free to leave a comment below and I will try my hardest to help you out where I can. Best of luck building everyone and I wish you the very best this holiday season ending of this year 2016.

(*Note: All prices are in USD, but URLs go to your local Amazon store)

This is generally the highest end gaming pc build here in Newb Computer Build’s Gaming PC Builds of the month articles, the reason being is that unless you are a high-rolling baller that is seriously into the hobby side of building the most extravagant gaming pc build possible, a great budget then this is generally not worth it for your standard gamer; which these articles are meant for. This build will rock a 1440p (2K) resolution gaming and able to play comfortably into 4K (even more so should you get the GTX 1080 graphics card). Also if you look a little further below there are hardware upgrades for this build that all increase performance a step further to either further solidify those higher resolutions or future games should you have a higher budget for you pc build this December 2016.

For the CPU, we have an Intel i5 6600K cpu and we have paired this with a different cpu cooler this month. Generally I have included the Hyper 212 EVO here due to it’s great performance per dollar spent. This month we have the  Noctua NH-D14, which is a better cooler but at a higher cost – this keeps us way below budget still.

For the all-mighty motherboard for this build, we have the MSI Z170A Gaming Pro Carbon, which includes everything you need with a few neat additions like Mystic Lighting, Gaming LAN and more. See the motherboard specifications below or learn more at MSI.com or if you want to read a solid review please check out bit-tech.com’s review on the MSI Z170 Gaming PRO Carbon. See below for the robust list of features of this motherboard taken from MSI.com:

The included RAM, we have 16GB (two 8GB sticks) with the included Kingston HyperX Fury DDR4 RAM, which is plenty enough memory for most of any gaming pc builds, but there is still room to pump more into the builds should you want to in the future (plus it really isn’t a whole lot more than an 8GB kit at the moment).

For our storage this month again, we have changed the SSD slightly to a SK Hynix Flash Memory 500 GB from the previous Samsung we have had in this spot as of late; this is the same storage space, but a much better bang for your buck. In benchmarks it was found that the SK Hynix SSD’s performed just behind the Samsung 850 Evo SSDs and would be unnoticeable by standard users making it a greta bang for buck purchase.

Now for the PC case for this less than $1300 or $1500 December 2016 PC Build we have a NZXT H440 Mid Tower Case (Matt Black/Red /w Window) – I have included this case before, because I am in love with how sleek and clean the overall design of this case is. Now the NZXT H440 does also come in glossy white or black with and without windows, should you want some diversity in your choice. Check out the full case specification below (from NZXT.com):

Or check out NZXT’s Overview of the NZXT H440 Design:

The hardware upgrades you see here are recommendations for the above 1440p – 4K PC build for December 2016. You can choose one or all of the hardware and it will be compatible with the above build and improve it’s performance in some way. Should you purchase all of the hardware upgrades instead of the alternatives already in the main build – then it will cost you around $1817 as of the start of the start of December 2016.

You can get an Intel i7 6700K cpu if you do things like video work, graphics work etc. since this isn’t really needed for pure gaming – plus this cpu is much cheaper than it used to be. This could also be a worthy upgrade for those wanting to further “future-proof” their high-end build.

The above gaming pc build a regular SATA SSD, which is perfectly suited for most gamers, although below is a faster Samsung 950 PRO PCIe SSD, which has faster read / write times and also 500GB of storage – a real premium PCIe Solid State Drive.

If you want more than the included air cpu cooler included in the main build, then below is the Corsair Hydro Series H100i V2 liquid cpu cooler. This cooler would be a substitute for the above included Hyper 212 EVO air cpu cooler and would provide a quieter, more efficient / more customized cooling experience. This option would be best purchased now rather then later so as to save on buying only one cooler for your PC (learn more at corsair.com).

Now for the ultimate increase in graphics performance and for those who have a huge chunk of change, one could consider the NVIDIA TITAN X. This graphics card would be fore 1 those with money; and two those who want to maximize their gaming performance in the 4K resolution realm. The TITAN X has a nearly 30% increase in performance over the GTX 1080, but it comes at a price premium of $1200+.

Here are some peripheral ideas for our under $1500 PC build. This is a new section this month and in the past we did peripheral articles separately, but since some individuals have had questions with regards to what best peripherals should go with their builds, I thought I would package these into the builds this month.

Below is a monitor that would go best with this build since it is capable of pumping games with high settings at 1440p into frame rates able to match its 144hz refresh rates. Also included is a premium mechanical keyboard and premium gaming pc mouse.