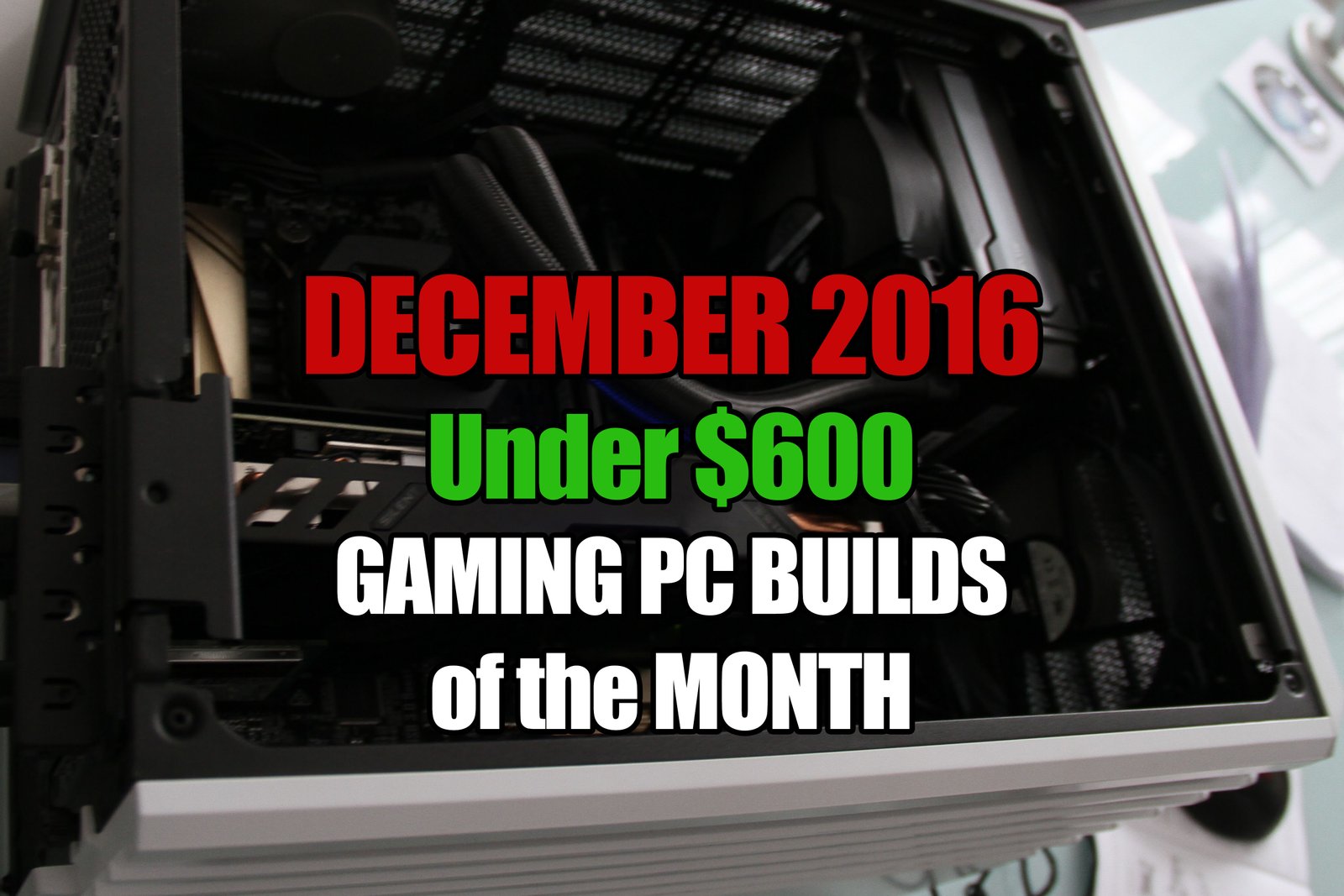 If you are looking for an under $600 budget gaming pc build that can kick the dust out of most any game on the market, then you are at the right place. This month this entry level gaming build has seen a bunch of changes to accommodate for price changes, which has resulted in a solid build capable of meeting the needs of most general gamers out there – honestly you probably don’t need to get a better build unless you plan to game at higher than standard HD 1080p resolutions, or if you have a super expensive high refresh rate monitor capable of pumping out even higher FPS.

Below you will find the complete $600 gaming pc build along with:

(*Note: All prices are in USD but URLs go to your local Amazon)

The under $600 gaming pc build is the go-to build that is probably what most gamers need and dream of. This build is capable of pushing most modern games at higher settings with a standard HD 1080p monitor without a problem at all.

Don’t believe me? Check this video out, this reddit post for examples (for more search for RX 480 / Intel 6100 benchmarks).

The cpu in this build is the Intel Core i3 6100, this should be a champ in most games as generally they are more gpu dependent, but if you do want a boost in more cpu dependent games you can consider an i5 (such as in the hardware upgrade suggestions below).

To pair with the 6100, we have an RX 480 4GB graphics card. Now this is a change form last months gpu choice with the RX 470, but the price difference between the two has narrowed so much that you would be better going with the RX 480 4GB variant.

We have switched up the motherboard this month to an ASRock ATX H170 PRO4, this is a great value board. This mobo is perfect for locked cpus (such as the Intel i3 6100 included in the build) and has capability for 7.1 audio and is very efficient for a value board. Some other features include (learn more at asrock.com):

For RAM we have a kit of Ballistix Sport LT DDR4 8GB which is plenty RAM for this build. And for storage we have switched from the previous SK Hynix 120GB SSD simply due to availability and went with a Kingston Digital 120GB, which is still a decent value.

The power supply has been switched up again this month to the EVGA 500 W1, with enough juice to power this build all the way.

Finally, the budget pc case chosen this month is the DeepCool TX Mid Tower TESSERACT SW – described as having a simple design with uncompromising cooling performance. The TESSERACT has the following features (learn more at deepcool.com):

$800 if all upgrades are included

These are the upgrade suggestions for specific hardware included in the above $600 / 1080p pc build. You can choose to upgrade one of all of the hardware and each will provide a performance boost for this build. If you choose to upgrade using all of the below hardware, the build becomes more like an $800 gaming pc build with some added performance.

If you want to dial down those cpu temps you could always opt for a non-stock cpu cooler, such as the infamous Cooler Master Hyper 212 EVO (included in both of the other builds for quite some time).

One of the more important upgrade solutions could be the AMD RX 480  8GB graphics card, for not much more in cost – the included card in the build above is the 4Gb version of this card.

You can increase your storage space by going with a faster Samsung 850 EVO 256GB SSD.

Finally, included is a much better performing gaming CPU, the Intel i5 6500, which may be a worthy investment to solidify performance in those higher cpu demanding games.

BUILD COST WITH ALL BELOW UPGRADES: $800

Here are some peripheral ideas for our under $600 PC build. This is a new section this month and in the past we did peripheral articles separately, but since some individuals have had questions with regards to what best peripherals should go with their builds, I thought I would package these into the builds this month.

Below is a 24-inch monitor that would go best with this build since it is capable of pumping games with high settings at 1080p standard HD resolutions. The included keyboard is a basic cherry mx mechanical keyboard without any special features, but everything most gamers really need. Also included is a basic gaming pc mouse with plenty of features.

If you don’t already have an operating system for your new gaming pc build, then you’re going to have to either invest in purchasing a standard OS such as Windows 10. Otherwise, there are some free alternatives that you could consider below as well. Keep in mind that you will need an optical drive should you decide to purchase the install discs, however you can also purchase Windows online or as a USB stick and install it that way – this would be the process for installing your OS without an optical drive (which isn’t included in each of the base builds above).

The following are some operating systems you can consider installing upon putting your Gaming PC build together. The first three will cost you and are either Windows 7 or 8.1, or 10 – I have no opinions here so I’ll leave the purchase of these up to the discretion of yourself, but do keep in mind that either way you do have the option of upgrading to Windows 10 for now. I have also included two other operating systems that are both currently free. Ubuntu is a Linux based operating system. The last OS is SteamOS, which is also a Linux OS being developed by Valve Corporation and is being made to be used for a Steam Machine game console.